How does a shower solenoid coil work?
Print

Does your electric shower continue to flow when switched off?

Or, when powered on, there is no flow at all?

This a common fault on electric showers. The culprit is usually the solenoid coil. Read on below for more information on how these work.

We recommend to consult a qualified tradesperson before attempting any inspection or work inside the casing of an electric shower. It's important to note that before removing the front cover of a shower, the water should be switched off and the showers electricity isolated (made safe at the fuse box rather than just the isolation pull cord).

When you turn the shower on, an electric current is introduced and a small magnetic field forms around the coil in the solenoid. The magnet moves a plunger, which opens the valve, allowing water to pass through and out of the shower.

When the shower is turned off, the removal of current will reduce the the magnetic field and allow valve to close, preventing the flow of water.

The health of a solenoid coil can be checked with a multimeter. It's not always necessary to do this as the symptom explained above is usually pretty indicative of a fault with the solenoid. You would do this by measuring for resistance across the two terminals. A healthy solenoid coil should have a resistance of over 3.5 Ohms (Ω). 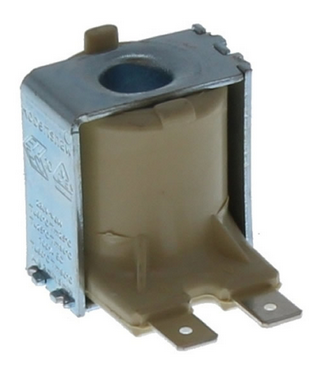 An example of a Mira Solenoid coil 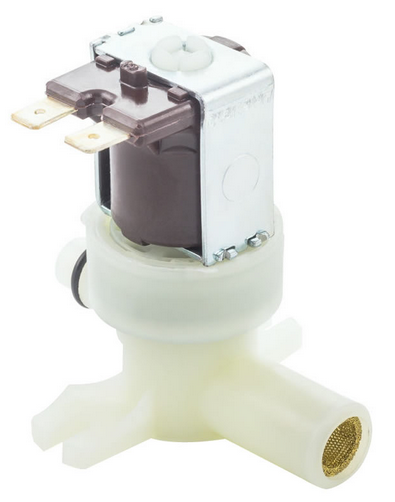 An example of a Triton solenoid coil with valve assembly

A solenoid valve coil is usually fitted on the flow valve, and connected to the inlet within the shower itself. The part may be available in a few configurations depending on the model and manufacturer of your shower. Often you can replace the solenoid itself, although on occasion it is sold attached to flow valve/valve housing part.

The best way to find out which solenoid you need is to start by identifying your shower model. For help with this see Finding your shower or part (including identification tips and support)

For more information or to troubleshoot your shower further, why not take a look at our Fault finder